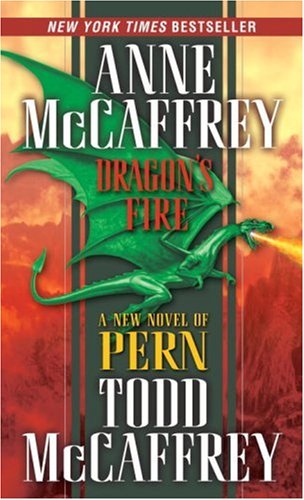 The McCaffreys' second fire-breathing collaboration (after 2003's ) again proves why these fabled dragons still cast a spell. Pellar, a mute Apprentice Harper; Halla, a homeless girl; and Cristov, a miner's son, learn invaluable life lessons as the planet Pern prepares for the return of the deadly Red Star and its annihilating "Thread," which can only be destroyed by firestone-fueled dragonfire. But mining firestone is dangerous work, often carried out by children of disenfranchised criminals called the Shunned. Accompanied by his new fire-lizard Chitter, Pellar joins Masterharper Zist in a search for Moran, a missing Journeyman Harper who's involved with the Shunned. Pellar finds his fate intertwined with Halla, but his tangle with Tenim, a ruthless thief, almost keeps them apart. Their friend Cristov learns about the Shunned firsthand after a terrible mine explosion. Fortunately, events lead to dragon-riding wish fulfillment and a remarkable discovery. While it allegorizes the risks of mining fossil fuels and the horrors of slave labor, this coming-of-age fantasy offers suitable dragon play for all ages.