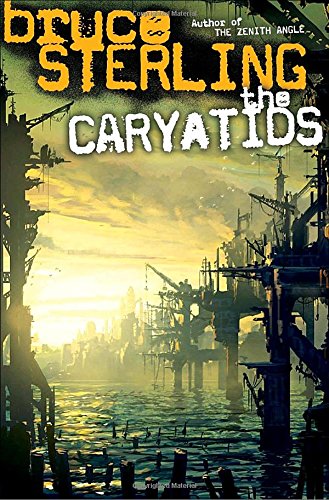 Caryatids, in Greek architecture, are stone women who support massive buildings. The Caryatids of Bruce Sterling's shimmering new novel—Vera, Radmila and Sonja—support the weight of a near-future world. They are the last of seven clone sisters created by a mother accused of Balkan war crimes, now exiled in orbit. We're 50-some years into the future, and the planet is split into an international, symbiotic competition between the hypernetworked Acquis, who train distressed, abandoned children into tight-knit cadres of activists, and the Dispensation, more sedate, mannered and cosmo-business in its orientation.

Vera works with an Acquis team remediating the Croatian island of Mljet, laid waste by toxic dumping and the rising waters of global warming. The Acquis technology is extreme but humanly adapted: the users wear bonewear (amplified skeletal suits that allow tremendous feats of speed and strength) and spex (laser-equipped eyeshades that hook their wearers into a postencyclopedic wonderworld of information.

In a beautifully realized and Huxleyan Los Angeles, Radmila has fit too snugly into a Dispensation Family, but California is being squeezed between a geological devil and the surging deep blue sea. The Family sees these changes in terms of economic potential, and they track real estate values by the second: Norwalk is glamorous; beach property is cheap.

Sonja, dotted with the shrapnel of her own self-destructive past, performs medical and social work in the middle of a constantly rebirthing China. Due to female infanticide, there are far more men than women in China—the reverse of Russia, where men die young—and Sonja hooks up with a Gobi jihadist who indulges both her sexual appetites and her political ambitions.

Sterling's language is kaleidoscopic. We swim into a chapter, and his ideas and language flash and dance like sunlight off the Adriatic, then coalesce in a moment of plot; the effect is unsettling, but suited to the world he reveals spark by hammered spark. Dispersed around the world, the sisters mirror Earth's difficulties: traumatized by their origin, they hate each other. Their solutions may be Earth's solutions as well.

In John Brunner's 1968 masterpiece, , excerpts from fictional author Chad C. Mulligan's “The Hipcrime Vocab” provide sharp, street-smart and world-wise commentary on the culture of 2010. Bruce Sterling is the closest we've come to Mulligan in the actual 21st century. His international perspective is rare in science fiction, which often suffers from Amerocentric bias. A new novel from Sterling is a guarantee of something wild and tasty, and amply fulfills that promise.