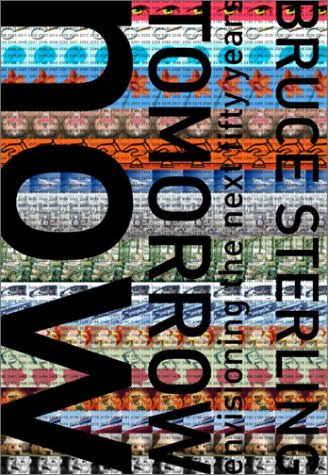 Sterling is best known for writing social satires disguised as science fiction, but over a decade ago, demonstrated his ability to apply his firm grasp on the cultural forces shaping today's world to nonfiction as well. Now those analytical skills take on the future; although he can't tell readers what will happen when, he does share good ideas about how to deal with it when it does. After a primer on the various forms of futurism, Sterling offers a seven-part consideration of the 21st century, with a conceptual structure inspired by the "seven ages of man" speech from Shakespeare's . Taking the infant, the student, the lover, the soldier, the justice, the pantaloon and "mere oblivion" each in turn, this sweeping vision encompasses everything from genetic engineering and ubiquitous computing to the real threats to world peace. (Sterling says we shouldn't be as worried about ideological terrorists like Osama bin Laden, who create momentary disruptions, as about opportunistic thugs, such as Chechen warlord Shamil Basaev, who, according to Sterling, will gladly exploit chaos for profit.) There are constant reminders that progress is rarely, if ever, orderly and efficient, because "in the real world, technology ducks, dodges, and limps" its way forward. But steady, reliable technocratic societies, if they approach the future with "flexibility and patience," should be able to weather even the most radical technological and cultural changes. Sterling's breezy tone and insightful speculations reposition this "cyberpunk" hero as a fun hybrid of Robert Kaplan and Faith Popcorn, ready to join the punditocracy and reach out to a broader readership.