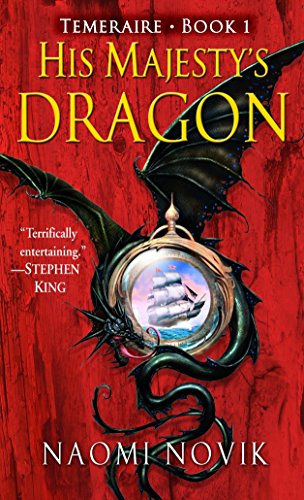 In this delightful first novel, the opening salvo of a trilogy, Novik seamlessly blends fantasy into the history of the Napoleonic wars. Here be dragons, beasts that can speak and reason, bred for strength and speed and used for aerial support in battle. Each nation has its own breeds, but none are so jealously guarded as the mysterious dragons of China. Veteran Capt. Will Laurence of the British Navy is therefore taken aback after his crew captures an egg from a French ship and it hatches a Chinese dragon, which Laurence names Temeraire. When Temeraire bonds with the captain, the two leave the navy to sign on with His Majesty's sadly understaffed Aerial Corps, which takes on the French in sprawling, detailed battles that Novik renders with admirable attention to 19th-century military tactics. Though the dragons they encounter are often more fully fleshed-out than the stereotypical human characters, the author's palpable love for her subject and a story rich with international, interpersonal and internal struggles more than compensate.