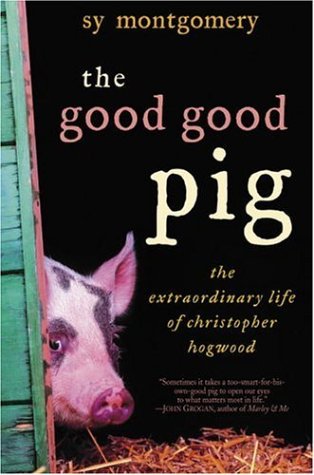 The Good Good Pig: The Extraordinary Life of Christopher Hogwood

Montgomery's books on exotic wildlife ( , etc.) take her to the far corners of the world, but the story of her closest relationships with the animal kingdom plays out in her own New England backyard. When she adopts a sickly runt from a litter of pigs, naming him Christopher Hogwood after the symphony conductor, raising him for slaughter isn't an option: Montgomery's a vegetarian and her husband is Jewish. Refitting their barn to accommodate a (mostly) secure sty, they keep Christopher as a pet. As he swells to 750 pounds, he becomes a local celebrity, getting loose frequently enough that the local police officer knows to carry spare apples to lure him back home. The pig also bonds with Montgomery's neighbors, especially two children who come over to help feed him and rub his tummy. Montgomery's love for Christopher (and later for Tess, an adopted border collie) dominates the memoir's emotional space, but she's also demonstrably grateful for the friendships the pig sparks within her community. The humor with which she recounts Christopher's meticulous eating habits and love of digging up turf is sure to charm readers.