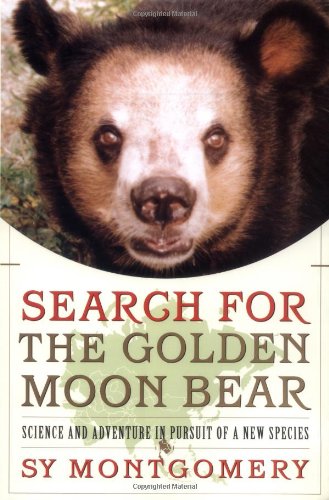 SEARCH FOR THE GOLDEN MOON BEAR: Science and Adventure in Pursuit of a New Species

Though this eye-opening book starts out as a chronicle of a scientist's search for the elusive golden moon bears of Southeast Asia, it quickly turns into a spiritual, cultural and ecological study of two Third World nations ravaged by war and greed. Laos has the distinction of being the most heavily bombed country in the world, and Cambodia the most heavily mined (one in 236 Cambodians is an amputee, the author notes), but that doesn't keep journalist Montgomery () from accompanying Gary J. Galbreath, professor of evolutionary biology at Northwestern University, as they embark on an expedition to determine whether the golden moon bear is a new species or just a rare "color phase." While traveling from site to site searching for bears and plucking out their hairs (to use in DNA analysis), the two encounter a number of perils—including monstrous leeches, inch-long ants and machine-gun–armed bandits—as well as a handful of extraordinary people who are trying to preserve what is left of Asia's wildlife and forests. Sadly, all of the bears Montgomery and Galbreath find are either in sanctuaries, caged in zoos, or held in restaurants, destined for the chopping block. Montgomery vividly recounts her sometimes humorous, sometimes horrifying experiences with a reporter's keen eye, a conservationist's outrage and a poet's lyricism ("...the precise triangulated leaves of bamboo, the graceful tracery of vines, the embrace of living wood and breathing leaves soothed our souls"). Readers who aren't conservationists to begin with will be by the end of this heady and haunting narrative.