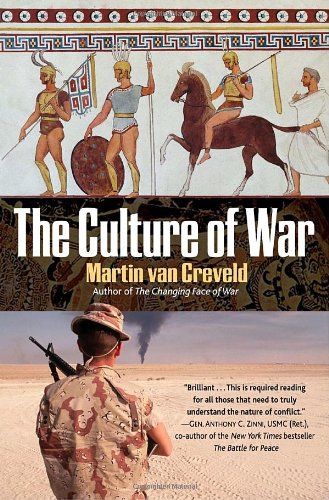 The Culture of War

Hebrew University’s van Creveld remains unsurpassed as a scholar of war. In this provocative volume, he challenges perhaps the subject’s single greatest shibboleth—at least in Western culture. Since the Enlightenment, war has been described as a means to an end, serving essentially rational interests. Nothing, van Creveld asserts, could be further from the truth: “war exercises a powerful fascination in its own right.” To dismiss this is to overlook that war has generated a distinctive culture, from uniforms to war games to parades, that is despised and regularly denigrated as atavistic and irrational. Van Creveld demonstrates that war is an essential element of history, rooted in psychology. In a tour de force of scholarship and insight, he takes readers through the processes of preparing for, waging and commemorating war. That culture makes men face death willingly, even enthusiastically, because it is an end in itself. “[T]o be of any use, the culture of war be useless.” Its traditions and rules are not constructions, but part of the fighter’s soul—and as such, for better and worse, part of the human condition. Illus.