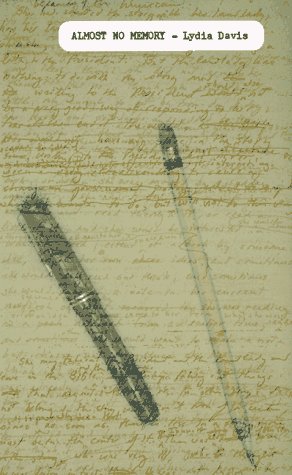 The spirit of Donald Barthelme lives on in the pen of Lydia Davis. One of the most interesting and playful of American experimental writers, Davis (The End of the Story, 1995) is a maker of miniatures, elliptical exposures of anguish, desire and dread. In this latest collection of 51 stories, some are no longer than 15 or 20 lines. To appreciate Davis, a reader must enter into the author's obsessive interest in minutiae and accept her postmodern fascination with language as the subject, not merely the medium, of fiction. In ""Foucault and Pencil,"" she writes: ""Sat in subway car, took out Foucault and pencil but did not read, thought instead about situation fraught with conflict, red flag, recent argument concerning travel: argument itself became form of travel, each sentence carrying arguers on to next sentence, next sentence on to next."" But, particularly in ""The Professor"" and ""The Cats in the Prison Recreational Hall,"" Davis displays a deadpan humor. This and a gift for the swift delivery of menacing details--notably in ""The Fish Tank""--ally Davis with Barthelme (himself a descendant of Kafka), with whom she shares a suspicion of the unexamined mundane and a delight in stealthy jokes. In three longer tales, she showcases a comfort with narrative storytelling. ""Lord Royston's Tour"" starts out as parody of a premodern travelogue, complete with surreal descriptions of imperial cities, desert crossings, dead Cossacks and a shipwreck, but it quickly morphs into an arch-literary spoof in which the absurd layering of mannered information provokes unexpected laughs. At their best, these stories are as entertaining as they are formally exquisite. (June)
close
Details