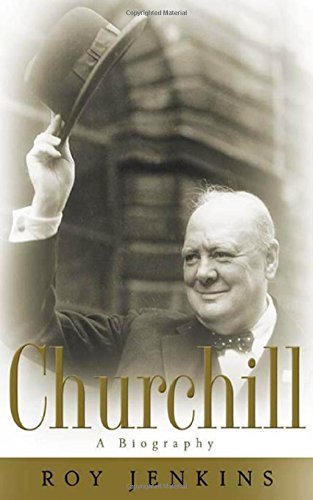 Winner of the Whitbread Prize for (1997), Jenkins offers a bloated yet idiosyncratic and accessible life of England's greatest modern prime minister. Jenkins's wry wit and judgments of great men, untainted by awe, partly offset the fact that, as he admits, he has few new facts to add to an already exhaustively recorded life. Jenkins has a propensity for unnecessary French and curious adverbs (), adjectives () and nouns () and is at his best exploring Churchill's three out-of-office "wilderness" periods and his writing jobs (requiring a staff of loyal, ill-paid researchers and secretaries to take his clangorous dictation), which helped support his expensive lifestyle. ("I lived in fact from mouth to hand," Churchill confessed.) But as the statesman's many decades wind down, the biographer himself seems to tire, resorting to a litany of itineraries. American audiences may be drawn to Jenkins's revisionist views of Churchill's relationships with Roosevelt, with whom he sees "more a partnership of circumstance and convenience than a friendship of individuals," and with Eisenhower, a "political general" who was "always a little cold for Churchill's taste, with the famous smile barely skin-deep." Jenkins is hard on Churchill for being soft on alleged mountebanks like Lord Beaverbrook. He dwells only briefly on Churchill's family affairs, aside from expressing skepticism about his reputedly warm marriage to Clementine; she often advised her husband wisely, but "managed to be absent at nearly all the most important moments of Churchill's life." Jenkins's judgments and the fact that he has boiled this eventful life down to a single volume will attract many readers to this entertaining, though often exasperating study. 32 pages of photos and maps not seen by