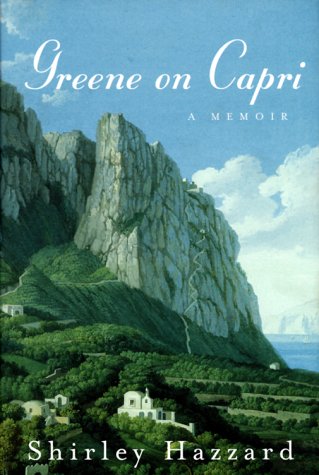 Greene on Capri: A Memoir

Since Roman emperors Augustus and Tiberius found refuge and inspiration on this magnificent, awe-inspiring rocky island in the Bay of Naples, Capri has been an escape, a place of inspiration for rulers, artists and writers. Hazzard (The Transit of Venus, etc.) and her husband, Francis Steegmuller, who have visited the island over the course of 30 years, starting in the late 1960s, developed a lasting relationship with fellow islander Graham Greene. Hazzard writes evenhandedly of their relationship with the sometimes volatile, contrary and often solitary Greene, who, she notes, was ""visibly present on Capri"" but ""had no air of belonging."" Periodically during those years, the three met at a restaurant called Gemma, took walks or dined at Greene's cottage, Il Rosaio, where he was working on The Honorary Consul. Hazzard evokes the island's charm and the spell it cast on such intermittent resident ex-pats as Norman Douglas, Henry James, Harold Acton, Maxim Gorky and Lenin. On Greene, however, Capri's charms were often lost: Hazzard observes that food, for example, ""remained something of a tyranny"" for Greene, who rarely indulged in and almost never commented on the tastiness of the local cuisine. While Capri was an escape for Greene, it also allowed him to form a few intense relationships: he spent time here with Catherine Walston (whom he fictionalized in The End of the Affair); Yvonne Cloetta, his last lover; and good friend Dottoressa Elisabeth Moor, who was an inspiration for Aunt Augusta in Travels with My Aunt. While Norman Sherry's biography, The Life of Graham Greene, is more comprehensive, Hazzard's precise prose beautifully captures the literary tone of the island through the decades. (Feb.)
close
Details