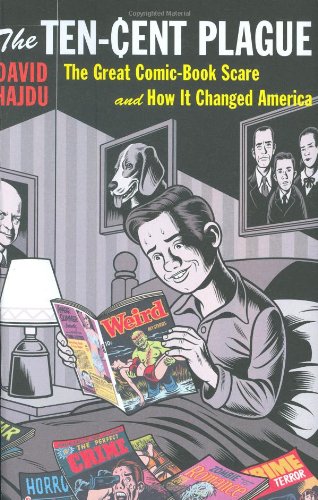 The Ten-Cent Plague: The Great Comic-Book Scare and How It Changed America

After writing about the folk scene of the early 1960s in , Hajdu goes back a decade to examine the censorship debate over comic books, casting the controversy as a prelude to the cultural battle over rock music. Fredric Wertham’s , the centerpiece of the movement, has been reduced in public memory to a joke—particularly the attack on Batman for its homoeroticism—but Hajdu brings a more nuanced telling of Wertham’s background and shows how his arguments were preceded by others. Yet he comes down hard on the unsound research techniques and sweeping generalizations that led Wertham to conclude that nearly all comic books would inspire antisocial behavior in young readers. There are no real heroes here, only villains and victims; Hajdu turns to the writers and artists whose careers were ruined when censorship and other legal restrictions gutted the comics industry, and young kids who were coerced into participating in book burnings by overzealous parents and teachers. With such a meticulous setup, the history builds slowly but the main attraction—EC Comics publisher Bill Gaines’s attempt to explain in a Senate committee hearing how an illustration of a man holding a severed head could be in “good taste”—holds all the dramatic power it has acquired as it’s been told among fans over the past half-century.