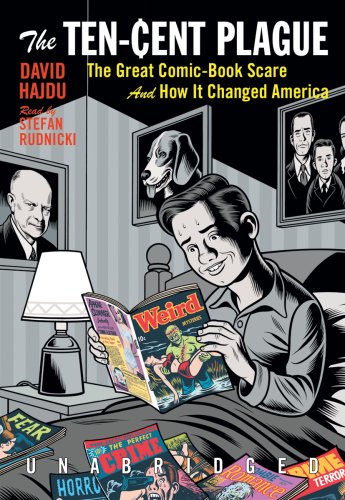 This meticulous exploration into comics and the censorship campaigns of the late 1940s and 1950s proves interesting and accessible to even neophytes of comics. Hajdu reveals a complicated and controversial history interlacing public opinion and “research” on the effects of comics by cultural critics such as Sterling North and Frederic Wertham with interviews of artists, publishers and consumers of comics at the time. Stefan Rudnicki's deep gravely voice with its smooth release and pace compliments the sometimes exhaustive Hajdu. However, Rudnicki's quoting voice can be both tiresome and questionable as he instills accents that are not necessarily suggestive from the text, and often they are indistinguishable from other similarly accented voices. Surprisingly, though the topic is highly visual in nature, listeners won't necessarily feel they are missing out on the illustrations and photos in the book.