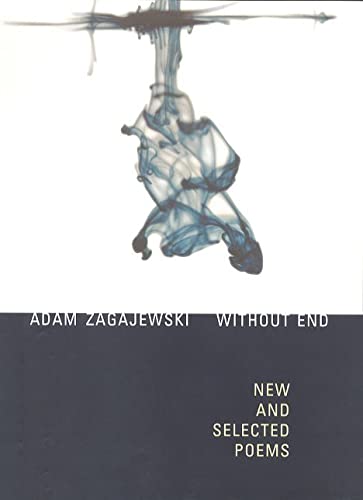 WITHOUT END: New and Selected Poems

As he left his native Poland and turned from the committed poetry of his "Generation 69" youth, Zagajewski began to infuse his work with a deep distrust of the darker potentials of language as a tool of recruitment, ready-made allegiance and/or retaliation. What remains, powerfully, is restitution and revelation; Zagajewski has picked up the mantle of mystical, Catholic Romanticism offered by Herbert and Milosz. Showcased here are the loose, abstract, dreamy lyrics that have become his trademark, the bulk of which are drawn from three previous U.S. releases: (1985), (1991) and (1997). For Zagajewski, all cities are Lvov, the city his family fled, whose streets are now available to him only through remembrance and imagination. A symbol of superfluity ("There was always too much of Lvov"), of Romantic desire and the lost paradise which spurns, Lvov provides an ideal space into which the real world bleeds, and from whose confines one can reach the liberating vistas perceived by the unfettered mind. Such imaginative excesses, with their whimsical non-linearity and continual sway away from direct representational language, work best in the 48 new poems here when the poet's sense of humor prevents, particularly in translation, Romantic imagery from veering into sentiment—when the speaker is able to ask facetiously, "But who could it have been,/ since the castle had been empty for so long,/ given up to bats and irony?/ Still everything seemed to indicate/ that someone was dying in the palace./ One couldn't overlook/ the signs of life." Readers won't be able to either.