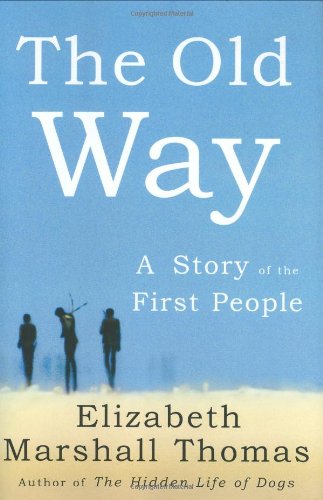 The Old Way: A Story of the First People

In 1950, Thomas ( ), at 19, joined her civil engineer father, her ballerina mother (who would become a celebrated anthropologist) and her brother on a life-changing expedition into southwest Africa's Kalahari Desert to live among the Ju/wasi Bushmen. Less a rigorous anthropological study than a loving, nostalgic ode to a self-sustaining culture of hunter-gatherers, this book recounts their now extinct way of life. The Ju/wasi used ostrich eggs to hold more than a day's water supply to expand their foraging range, and burned dry grass to encourage the growth of green grass, thus attracting large antelopes and other prey. The Ju/wasi allowed polygamy and divorce, welcomed baby girls as much as baby boys and treated children with unfailing kindness, but practiced infanticide on children born to nursing mothers because, with their low-fat diet, they could produce enough milk for only one child. In recent decades, the Bushmen have been removed from their land and their way of life has been obliterated by modernity, racism, poverty, alcoholism and AIDS. Thomas offers readers a glimpse of how our prehistoric ancestors undoubtedly lived, worked, loved and played. Photos from the Marshall family album freeze the Ju/wasi in the happy 1950s.