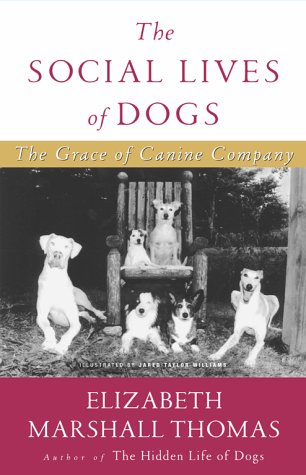 The Social Lives of Dogs

As she proved in her bestselling The Hidden Life of Dogs, no one writes with greater emotional intelligence about man's (and woman's) best friend than Thomas. Like that marvelous book, this worthy sequel reports on the canines in the author's life, beginning with Sundog, a large white dog Thomas found abandoned in Cambridge, Mass. Upon moving into Thomas's New Hampshire home (which also embraces cats, parrots and several humans, including the author's husband and aged mother), Sundog was ostracized by the three dogs already there and so bonded with Thomas and her husband, as ""the first member of our household to cross species lines."" As time and pages go by, Sundog is joined by Misty, a purebred sheepdog raised by an earlier owner under horribly rigid conditions; Pearl, an Australian shepherd-chow; Ruby, a maladjusted mix who leaks urine; and Sheila, who's probably part dingo. In narrative as dramatic as good fiction, but rooted in careful observation of animal ways, Thomas recounts how household members adjusted to one another, forming various groups and jockeying for position within and among groups; one extraordinarily gripping section details how Sheila, who as the household's newest member should have occupied the lowest position among the dogs, worked her way up the canine ladder through aggression and guile until Pearl came up with a diplomatic ""solution"" to her challenge. As enchanting as Thomas's stories are, the most potent magic in her charismatic, opinionated book comes from her ability to lead readers into a fresh world, one that allows animals their own minds (where, for instance, a dog might try ""her best to charm us with her pleasant ways""). Anyone who cares about animals will relish joining Thomas in that rich and happy place. Illus. by Jared Taylor Williams. (June)
close
Details