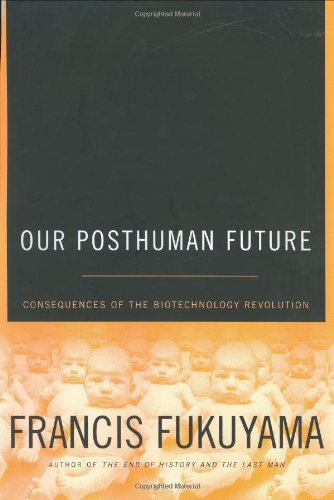 OUR POSTHUMAN FUTURE: Consequences of the Biotechnology Revolution

Fukuyama (; ) is no stranger to controversial theses, and here he advances two: that there are sound nonreligious reasons to put limits on biotechnology, and that such limits can be enforced. Fukuyama argues that "the most significant threat" from biotechnology is "the possibility that it will alter human nature and thereby move us into a 'posthuman' stage of history." The most obvious way that might happen is through the achievement of genetically engineered "designer babies," but he presents other, imminent routes as well: research on the genetic basis of behavior; neuropharmacology, which has already begun to reshape human behavior through drugs like Prozac and Ritalin; and the prolongation of life, to the extent that society might come "to resemble a giant nursing home." Fukuyama then draws on Aristotle and the concept of "natural right" to argue against unfettered development of biotechnology. His claim is that a substantive human nature exists, that basic ethical principles and political rights such as equality are based on judgments about that nature, and therefore that human dignity itself could be lost if human nature is altered. Finally, he argues that state power, possibly in the form of new regulatory institutions, should be used to regulate biotechnology, and that pessimism about the ability of the global community to do this is unwarranted. Throughout, Fukuyama avoids ideological straitjackets and articulates a position that is neither Luddite nor laissez-faire. The result is a well-written, carefully reasoned assessment of the perils and promise of biotechnology, and of the possible safeguards against its misuse.