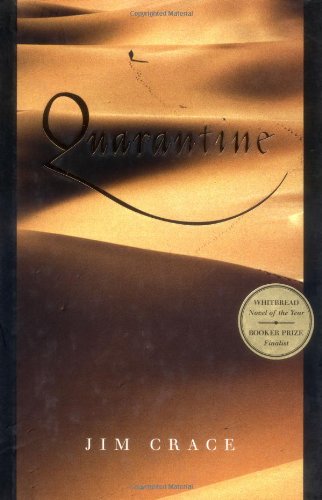 This extraordinary novel, a sometimes realistic, sometimes hallucinatory account of the 40 days Jesus spent in the wilderness, is the latest by England's Crace, a writer of great gifts (The Gift of Stones, Continent), and was reportedly the runner-up to The God of Small Things for the Booker prize. It is a remarkably successful attempt to put a story known by everyone into a convincing physical and historical context. The beauty and precision of Crace's writing, as well as his store of knowledge about such arcane matters as weaving two millennia ago and the fauna of the Judean desert, give what could have been a fey experiment an air of overwhelming authority. For a start, Jesus, portrayed as a rather callow youth befuddled by prayer, is not at the center of the canvas. That spot belongs to Musa, a stout, lecherous, bullying merchant with a beguiling tongue, whose skinny and long-suffering wife, Miri, has left him for dead in his tent as the story begins. Then, Jesus is not the only pilgrim essaying a fast in the desert. Setting about their vigils in their very different ways are Shim, a handsome, self-absorbed ascetic; Marta, a prosperous but barren woman who yearns to conceive; Aphas, an elderly Jew with cancer; and a dumb, wiry peasant. After Jesus seems to bring Musa back to life (he is obsessed with the idea of being a healer), the merchant comes to dominate the group, using his salesman's skills to convince them that he is their landlord and they owe him tribute. Only the thought of Jesus, who hides from the rest in his inaccessible cave, gives him pause. As for Jesus himself, can Musa be the devil sent to tempt him? The ways in which Crace has the six desert dwellers interrelate with each other and with Jesus are spellbinding; the book is a superbly crafted combination of historical and inspirational fiction that is genuinely unique. Rights: David Godwin Assoc. (Apr.)
close
Details