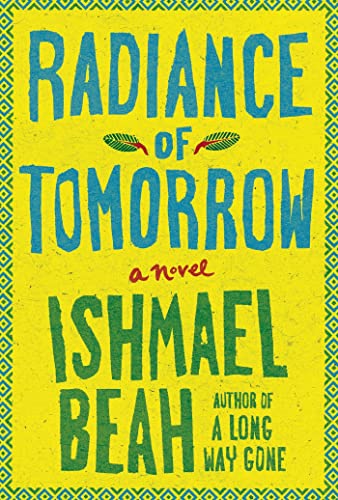 Reviewed by Edwidge Danticat. In his 2007 memoir, A Long Way Gone, Ishmael Beah writes of those waiting for war to invade their lives: “Families who had walked hundreds of miles told how relatives had been killed and their houses burned. Some people felt sorry for them and offered them places to stay, but most of the refugees refused, because they said the war would eventually reach their town.” The decade-long war in Sierra Leone between government forces and Liberian-funded rebels did eventually reach Beah’s and other towns, and he was swept up in the conflict as a child soldier, a story he vividly recounts in his memoir. This time Beah has written an actual novel—his first—not about the war itself, but about its aftermath. What happens when those who have committed atrocities or have been the victims of them return to what is left of their homes? We get our answer via several residents of the devastated Sierra Leonean town of Imperi, where an older couple, Mama Kadie and Pa Moiwa, and a young schoolteacher named Bockarie are among the first to return. Recalling the Friday afternoon the town was attacked, they remember the rocket-propelled grenades that brought down the chief’s compound, heralding a new order while “killing many people, whose flesh sizzled from the explosions.” Those who escaped, and eventually made it through the war in good enough shape to return, considered themselves lucky, save for the survivor’s guilt that forced them to seek comfort, even in the most horrifying places. Looking at the piles of human bones that still litter the town, Mama Kadie imagines that she might be able to identify the remains of her grandchildren among them. The pain of not knowing whether or not they had survived the war is too much to bear and she wants some finality. The town eventually falls into some kind of routine. Other survivors flood in from refugee camps in neighboring countries. Burned houses are rebuilt and a school is opened, allowing Bockarie to teach there. The notion that the town might return to its old, familiar ways soon vanishes, however, when a mining company, in search of rutile—used as a pigment in paint, plastic, and food—sets up shop, polluting the town’s waterways. Bockarie’s best friend also dies a senseless death while working at the mine. Bockarie eventually decides to return with his friend’s wife to her hometown, only to find life even more unbearable there, in the shadow of a diamond mine. This leaves only Freetown, with its Chinese-run hotels, drug runners, and “false life” Europe- and U.S.-based returnees, who missed the war all together. This part of the novel leaves us wondering what might happen next to some characters to whom we’ve grown attached. However, as Beah reminds us on the book’s final page, “It is the end, or maybe the beginning of another story.... Every story is a birth.” In Radiance of Tomorrow, Beah has produced a formidable and memorable novel—a story of resilience and survival, and, ultimately, rebirth. Edwidge Danticat is the author of several books, including, most recently, Claire of the Sea Light, a novel.
close
Details