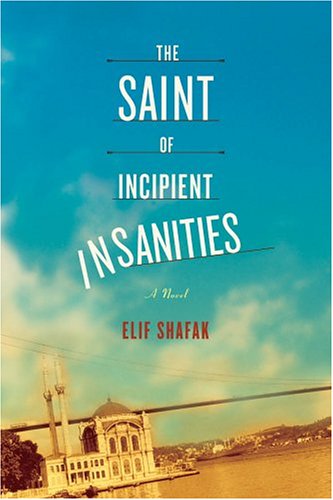 THE SAINT OF INCIPIENT INSANITIES

Three graduate school roommates—a Moroccan, a Turk and a Spaniard—are strange bedfellows in a potentially inhospitable land in this painstakingly multicultural but rather discombobulated first novel in English by Shafak, a prize winner in Turkey. Set in Somerville, Mass., in 2003, the novel shifts erratically between Ömer, the Turk, who's supposed to be finishing his poli-sci Ph.D., but prefers regular sex with his American girlfriend, Gail, a suicidal, feminist chocolate maker; Abed, the pious Moroccan, who cures his nightmares by watching slasher films; and Piyu, the clean-freak Spaniard, who loves food but dates a bulimic Mexican-American who doesn't. Each character is lost in one sense or another, and the book is about their attempts to discover how they tick and for whom. There's lots of potential there, but the story is stretched too thin by extraneous characters, subplots, repetition and contrivances. Shafak strives to explain to readers what it means to be an outsider in America—"So wonderful was his azonal void, of a substance so translucent almost invisible under the veneer of anonymousness; such a consummate stranger he had become in a world of suffocating familiarities"—but her linguistic acrobatics distract rather than enlighten. This is a brave attempt at a post-9/11 story about immigrants in America, but Shafak flails in the 21st-century melting pot.