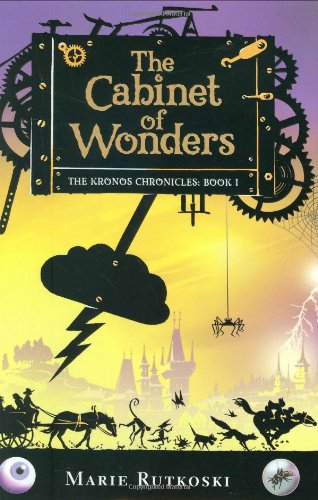 The Cabinet of Wonders: The Kronos Chronicles, Book I

Add this heady mix of history and enchantment to the season's list of astonishingly accomplished first novels: in Rutkowski's multilayered version of late–16th-century Bohemia, magicians coexist with peasants and courtiers, a tribe of gypsies use specially endowed “ghost” fingers, and the fate of Europe hangs on the schemes of an evil prince. As the novel opens, a metalworker with extraordinary gifts has returned from Prince Rodolfo's palace in Prague, having finished his commission to build a magical clock—but the prince has gouged out his eyes, so that he can never duplicate the clock or, worse, better it. Even more disturbingly, the prince wears the eyes himself. Vowing to recover her father's eyes, 12-year-old Petra sneaks off to Prague, with little more than the company of Astrophil, an erudite tin spider who can communicate with her. Proving herself a worthy relative of, say, Philip Pullman's quick-thinking, fearless heroines, Petra navigates her way past sorceress countesses, English spy magicians, dangerous gypsies and through bewitched palace halls until Rodolfo, wearing the ill-gotten eyes, catches sight of her. Infusions of folklore (and Rutkowski's embellishments of them) don't slow the fast plot but more deeply entrance readers. Ages 10–up.