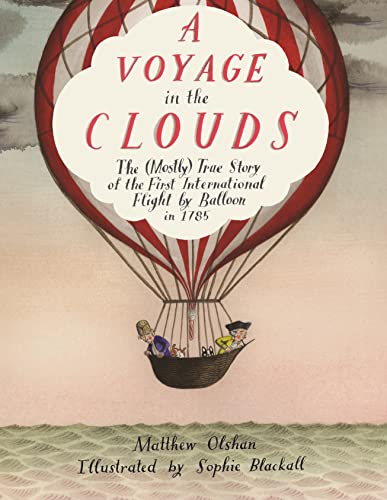 A Voyage in the Clouds: The (Mostly) True Story of the First International Flight by Balloon in 1785

The team behind the The Mighty Lalouche (2013) recounts the first international balloon journey, an expedition across the English Channel undertaken by a British doctor named Jeffries and a French balloonist named Blanchard in 1785. Tension arises even before the balloon leaves the ground as Jeffries discovers that Blanchard is plotting to exclude him from the trip. The two men cold-shoulder each other as the journey gets underway, but when the balloon starts to lose altitude, Blanchard’s heroism turns them into friends and allies. (They’re in their bloomers at the time, and Olshan keeps their rapprochement from getting too sentimental with a hilarious peeing scene.) The baroque ornamentation and carefully lettered speech balloons of Blackall’s spreads recall the work of George Cruikshank; like him, she has a gift for revealing that people dressed in petticoats and tricorne hats are just as human as the rest of us. With humor that’s never snarky, Olshan reminds readers that, sometimes, the challenge adventurers must overcome is not the elements; it’s their own vanity. Ages 4–8. Author’s agent: Seth Fishman, Gernert Company. Illustrator’s agent: Nancy Gallt, Gallt & Zacker Literary. (Oct.)

This review has been corrected to fix a misspelling of the author's name.