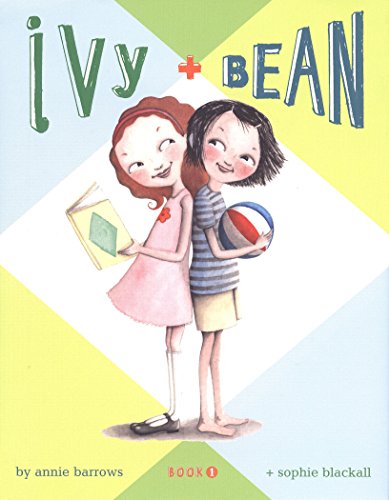 Barrows's debut children's book energetically kicks off a series about two seemingly unlikely pals, just right for kids moving on from beginning readers. Bean's mother suggests that she play with Ivy, the new girl across the street, "She seems like such a nice girl." Seven-year-old Bean says she already has plenty of friends ("Nice, Bean knew, is another word for boring"). After all, Ivy's long, curly red hair is neatly pushed back with a sparkly headband, and she always wears dresses and reads books; headband-, dress- and book-shunning tomboy Bean muses that Ivy "had never once in her whole life climbed a tree and fallen out." But when Ivy offers to get Bean out of a jam with her older sister, Nancy, Bean takes Ivy up on it. Bean discovers that the not-so-boring, wand-toting Ivy is in training to become a witch, and working on a spell that keeps its victim dancing for life—which sets Bean thinking about the ideal fate for bossy Nancy. Blackall's ( ) half-tone spot art and full-spread illustrations deftly capture the girls' personalities and the tale's humor, while also filling out fun details about Ivy's room and the neighbors' backyards. Barrows's narrative brims with sprightly dialogue and tidily ties everything together—both Bean and Ivy find a fast friend and set the stage for , scheduled for the fall. Ages 6-10.