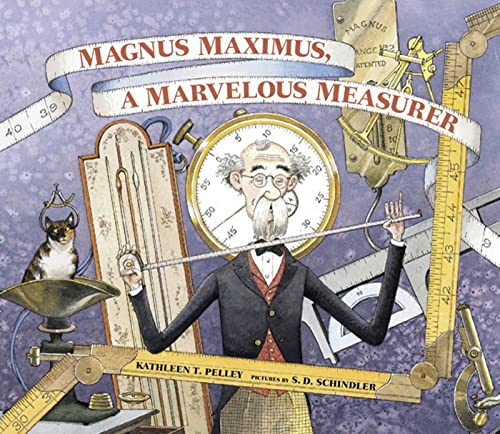 The alliterative title gives a taste of all the verbal frolicking to follow in Pelley's ( ) whimsical tale of an obsessive measurer named Magnus Maximus. When a circus lion walks into town, “People screamed and scrambled up lampposts. They skittered and scattered. They flitted and fluttered in a terrible dither.” But not the elderly Magnus, who earns the title of “town's official measurer,” after he stuns the lion into submission by measuring the width of its whiskers and fleas in its mane. A gentle lesson awaits the ultrafocused Magnus when a boy befriends him and teaches him that even more important than measuring the “floppiest ears” or the “stinkiest socks” is the “snugness of a hand in a hand.” Though sweet, the turn of events is not treacly, keeping the tale's pleasing silliness at the forefront. With equal humor, Schindler's ( ) muted, intricately crosshatched illustrations depict a formal, British 19th-century setting, with corseted ladies and men in top hats—the perfect foil to the ludicrous scenes. The comically pained expression of the lion, his whiskers stretched out to measure, is priceless. Ages 4–8.