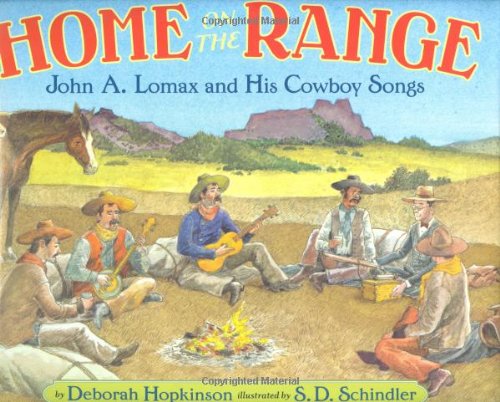 Home on the Range: John A. Lomax and His Cowboy Songs

With the flair for which she is known, Hopkinson ( ) chronicles the early life of John Avery Lomax, a pioneer of folk musicology who got his start collecting cowboy songs. The colorful narrative devotes several spreads to the song collector's childhood in Texas. Glimpses of his thoughts and emotions (e.g, “The songs went straight to John's heart, and he made up his mind to write down each and every cowboy song he heard”) as well as dialogue help personalize the story. Short, chapter-like segments begin with lyrics from cowboy songs, like “Poor Lonesome Cowboy,” although it may take a more sophisticated reader to connect the songs' themes with Lomax's life. Schindler's ( ) realistic illustrations, painted with a light touch in muted hues, ably capture the expressions of skeptical cowboys (“I'm not goin' poke my face up to your blamed old horn and sing,” says one at the sight of Lomax's Ediphone) or the eagerness with which Lomax goes about his work. Concluding author notes read more like a standard biography and sketch out Lomax's later years. Ages 6–8.