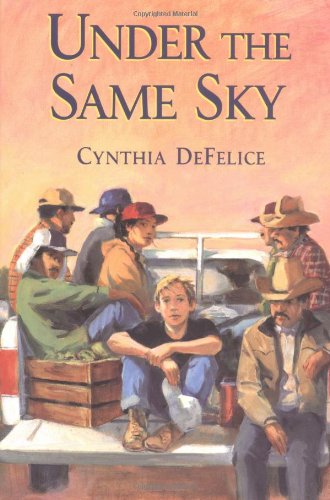 UNDER THE SAME SKY

Despite a heavy-handed start and a somewhat predictable outcome, DeFelice's () story about a 14-year-old who learns to respect the migrant workers on his father's farm offers much to absorb and stimulate readers. Joe, the narrator, initially seems spoiled as he asks for an $899 motorbike for his birthday ("Getting me the bike was the least my parents could do. Nobody had ever asked me if I wanted to grow up on a farm... in the middle of nowhere"). Joe's father decides Joe needs to learn the value of a dollar and tells him to earn the money by working in the fields. The plot conforms to type: Joe finds his tasks grueling and backbreaking and admires the skills of the hard-working crew of Mexicans, which includes teens who, like pretty 14-year-old Luisa, are wise beyond their years. At the same time Joe grows critical of his friends' shallow behavior and jaundiced attitudes and learns to think for himself. DeFelice shakes up convention, however, in a story line that draws attention to contradictory and confusing government policies regarding migrant workers. Without too much rigging of the scenes, she engineers a dramatic climax that allows Joe to demonstrate real courage—and that will let readers grapple with the notion that right and wrong are not always easily identifiable. Ages 10-up.