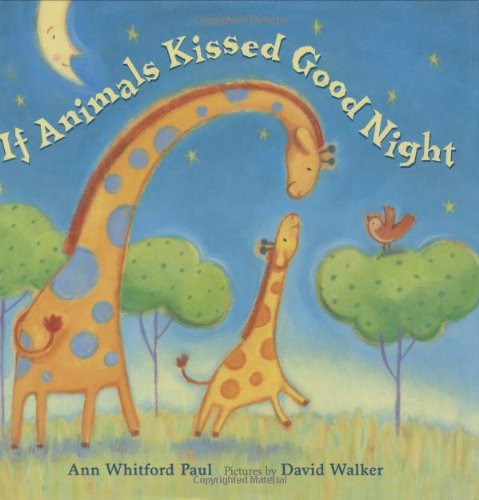 There are probably not enough synonyms for “cute” to cover this survey of hypothetical smooches between animal parents and offspring—not that there's anything wrong with that. Paul ( ) notes that the book was inspired by a game she played with her youngest son, and her text exudes the affectionate silliness of a beloved bedtime ritual, complete with nonsense sounds (a parrot and chick's beak-to-beak buss is “klick-a-klack, klick-a-klack, klick-a-klack, kleek”). Walker (previously paired with Paul for ) gets great emotional mileage from his rounded, stuffed toy–like shapes, velvety colors, and tiny dot eyes; the characters radiate unconditional love. There's a lot to go “Ahhhh” over (the lumpy posteriors of Papa Rhino and his calf are particularly endearing), but the most winning of the vignettes also serves as the book's running joke: the slo-mo kiss between a mama sloth and her cub. As they hang upside-down from a tree, in absolutely no hurry to part, their embrace is like the Energizer Bunny—it keeps going and going and going. Ages 3-6.