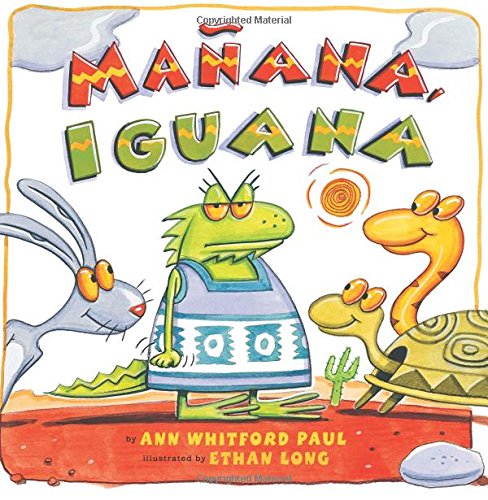 The little red hen goes south of the border—and takes on the guise of an iguana—for this bilingual twist on an old favorite. "On Monday, ," Iguana decides to have a fiesta on to celebrate spring. But each day when she asks her friends Conejo (rabbit) and Tortuga (turtle) to help with the preparations—writing the invitations, stuffing the piñata, etc., they respond, " . Not I." Culebra (snake) is no better—his pat answer is to flash a friendly smile and promise "If I grow arms tonight, I'll help you , Iguana." When party day arrives, it's not too hard to guess who isn't on the guest list. But unlike the original tale, Paul ( ) and Long ( ) don't end the story there. The three lazy friends have a pang of conscience, and while the pooped reptile hostess sleeps, they clean up the party mess. When grateful Iguana offers them leftovers, the response is " " Paul's inclusion of Spanish words into the largely English text can be clunky, coming off as a thinly veiled lesson ("Conejo hopped up and down.... Tortuga poked out of his shell"). But the running joke of Culebra's empty promise is a hoot, and Long's cartoons comically play up the three friend's empty-headed idleness (at one point, they're found turning a cactus into a desert equivalent of a snowman), and Iguana's slow boil. Ages 4-8.