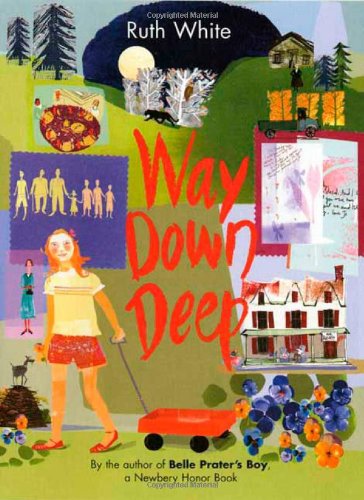 The opening chapters of this warmhearted story set in 1954 read like postcards from the holler, as White ( ) introduces the quirky residents of Way Down Deep, a town "cradled between the hills in a place that later became known as West Virginia." The central setting is a boardinghouse called The Roost, run by Miss Arbutus Ward, the last living member of the family that founded the town. Into her life drops Ruby, about age three, who turns up one June morning on the courthouse steps, unable to explain how she got there. Some of White's narrative teeters on the wobbly edge of farce: the Reeder siblings, for instance, are named Peter, Cedar, Jeeter, Skeeter and baby Rita ("Mama had run out of rhyming names, so she had to settle for a tongue twister," explains oldest sibling Peter). But as the mystery of Ruby's origins unravels, White reigns in her eccentric cast to focus on the girl's tender relationship with Miss Arbutus, and the story finds an emotional center. The ending is a bit neat, but this book brims with wise observations and beautifully realized moments, such as when Ruby explains what Miss Arbutus told her about why a fellow boarder, haunted by the mother who gave him up for adoption as a baby, sleeps all day: "God is in that place where sleep takes us. Way down deep inside, where all the answers lie." Ages 10-up.