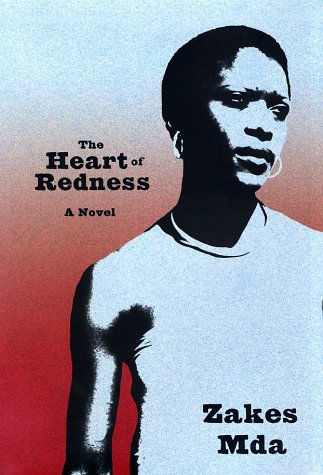 THE HEART OF REDNESS

In Mda's richly suggestive novel, a Westernized African, Camagu, becomes embroiled in a village dispute that has its roots in the 19th century. The war between the amaXhosa and the British in South Africa (known to Westerners as the Zulu Wars) was interrupted by a strange, messianic interlude in which the amaXhosa followed the self-destructive commands of the prophet Nongqawuse and were split between followers of Nongqawuse (Believers) and their opponents (Unbelievers). In the village of Qolorha-by-Sea in the late 20th century, the Believers still flourish. They put the onus for the distressing failure of Nongqawuse's visions on the Unbelievers' unbelief. The chief Believer is Zim; his rival, the chief Unbeliever, is Bhonco. The white store owner, Dalton, whose ancestor killed Zim and Bhonco's forefather, Xikixa, is on the Believers' side in the village's current controversy over whether or not to allow a casino in the village. The Believers oppose the changes they foresee coming to the village's traditions. The Unbelievers want economic development. Camagu originally comes to Qolorha looking for a woman whose memory haunts him. He ends up being associated with the cold, beautiful Xoliswa Ximiya, Bhonco's daughter, whose scorn for tradition eventually drives her from the village. Secretly, however, Camagu lusts for Qukezwa, the squat but sexy daughter of Zim. Mda's sympathies are with the Believers, but his eminent fairness forbids mere didacticism, and his joy in the back and forth of village politics beautifully communicates itself to the reader through poetic language enlivened by humor and irony.