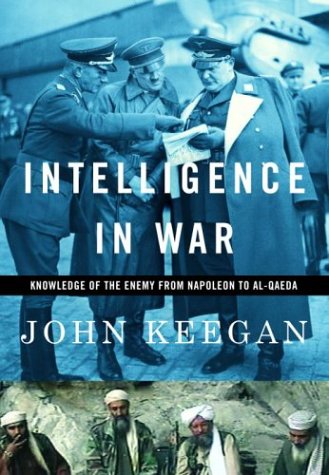 INTELLIGENCE IN WAR: Knowledge of the Enemy from Napoleon to Al-Qaeda

According to Keegan ( ), there is a good reason why "military intelligence" is so often described as an oxymoron: inflicting and enduring destruction often has no room for reflection, just retaliation. But retaliation tends toward attrition, and attrition is expensive; thought, for Keegan, offers a means of reducing war's price, taking commanders and armies inside enemy decision-action loops, helping identify enemy weakness, warning of enemy intentions or disclosing enemy strategy. Keegan offers a series of case studies in the operational significance of intelligence, ranging from Admiral Nelson's successful pursuit of the French fleet in 1805, through Stonewall Jackson's possession of detailed local knowledge in his 1862 Shenandoah Valley campaign, to the employment of electronic intelligence in the naval operations of WWI and its extension and refinement during WWII. For that conflict, Keegan expands his analysis, discussing intelligence aspects of the German invasion of Crete, the U.S. victory at Midway and the defeat of the U-boats in the Battle of the Atlantic. To balance an account heavily focused on technology, he incorporates a chapter on the importance of human intelligence in providing information on the Nazi V-weapons. Keegan concludes with a discussion of post-1945 military intelligence that stresses the difference between a Cold War in which the central targets of intelligence gathering were susceptible to concrete, scientific methods, and more recent targets that, lacking form and organization, require penetration through understanding. That paradigm shift in turn is part of Keegan's general argument that intelligence data does not guarantee success. This book shows that the British need not have lost on Crete; that the American victory at Midway was not predetermined. At a time when armed forces tout the "information revolution," Keegan writes in the belief that the outcomes of war are ultimately the result of fighting.