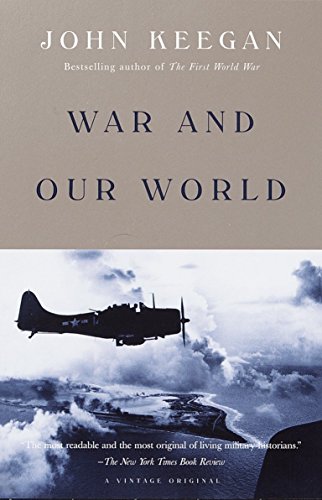 WAR AND OUR WORLD

Keegan, bestselling historian of the First and Second World Wars, synthesizes his views on war and peace in this series of five lectures given in 1998 and now published as a set of essays. Drawing on a lifetime of study and writing, Keegan ranges widely over his subject, delving into the history of war, the character of a professional soldier, the diverse views of anthropologists on the origin of social violence, the advent of high-tech warfare and many other relevant issues. Keegan argues that war takes so many forms and mutates so rapidly that it is impossible to define precisely. The author's best descriptive definition is that war is "collective killing for some collective purpose." Today, Keegan believes, the most catastrophic form of war, the use of nuclear weapons, is unlikely to occur, although he does not address the recent entry of India and Pakistan, among other nations, into the nuclear club. Currently, war occurs most often in multiethnic, underdeveloped areas of the world and is driven by poverty, ideology and cultural insecurity. Keegan puts the death toll in the world's wars over the past 50 years at some 50 million. One practical suggestion he offers is to control the proliferation of assault rifles, whose low price, high rate of fire and nearly universal availability have made large-scale slaughter possible anywhere. is replete with such insights and ideas, lucidly expressed by a master in his field.