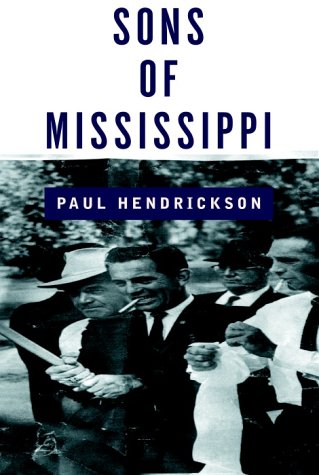 SONS OF MISSISSIPPI: A Story of Race and Its Legacy

"Nothing is ever escaped," is the woeful reminder Hendrickson imparts in this magisterial group biography-cum-social history, a powerful, unsettling, and beautifully told account of Mississippi's still painful past. Hendrickson, author of the searching Robert McNamara chronicle (an NBA finalist), sets out to profile seven Mississippi sheriffs photographed while one of their number postures with a billy club just before the 1962 riots against the integration of the University of Mississippi at Oxford ("Ole Miss"). The picture, shot by freelance photographer Charlie Moore, was published in magazine soon after, and it captured Hendrickson's imagination when he came upon it decades later. Chapter by chapter, Hendrickson reconstructs the everyday existences of the seven sheriffs, concentrating on the time of the photo, but taking his subjects through to their deaths. None are now living, but Hendrickson interviewed former Natchez sheriff John Ed Cothram in the early '90s, and the Cothram chapters comprise a paradigmatically subtle and eerie portrait of the intelligence and banality of evil, and how it destroys individuals. The number of telling quotes, interviews with friends and family, primary and secondary sources, allusions to art and history, and gut reactions Hendrickson offers are what really make the book. He begins with a wrenching retelling of the Emmett Till lynching—seven years before James Meredith fought for and finally won admission to Ole Miss, a bloody story Hendrickson also recounts (in addition to a fascinating recent interview with Meredith himself). The book's final third tries to get at the legacy of Mississippi's particular brand of segregation—the whites and blacks Hendrickson interviews throughout articulate it masterfully—by profiling the children of the men in the photo and of Meredith, with sad and inconclusive results. While Hendrickson can be intrusive in telling readers how to interpret his subjects, he repeatedly comes up with electric interview material, and deftly places these men within the defining events of their times, when "a 100-year-old way of life was cracking beneath them."