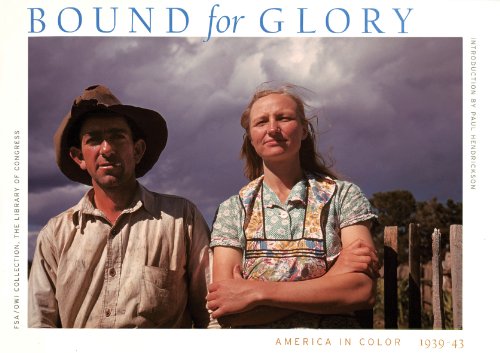 Taken from 1939 to 1943 under the auspices of the Farm Security Administration and the Office of War Information, these 175 "lost" photos feature shots by Russell Lee, Andreas Feininger and Marion Post Wolcott, using the then-revolutionary technology of Kodachrome film. Color photographs taken before 1939 have largely deteriorated, so these surviving photos are later than the most familiar b&w Depression-era shots. This 11¾"×8½" volume thus "colorizes" one's normally black-and-white impressions of a very vibrant time, as Hendrickson ( ) notes in his introduction. The logic behind the arrangement of the photos, which at first seems largely random, as it follows neither photographer, location nor chronology, becomes clear by the end of the book: the U.S.'s industrial rise. Images of urban lethargy and farmhands picking cotton under hot blue skies (the unbearable conditions of cotton-picking somehow seem more apparent in color) gradually give way to images of mobility, mechanization and a changing economy. Arnold T. Palmer's gleaming portraits of Rosie the riveter–like aircraft workers follow Jack Delano's earthier photos of male railroad workers, their sweaty and intent faces caked with soot. Tellingly, the book ends with photos of bombers flying over California.