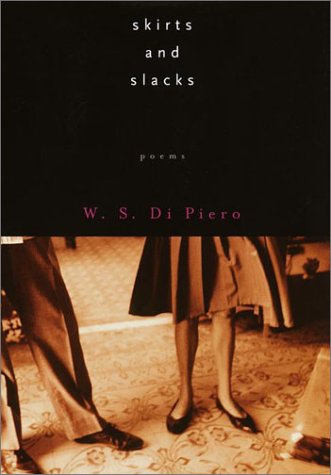 A translator of Euripides, Giacomo Leopardi, Sandro Penna, Leonardo Sinisgalli and others; a careful critic who has produced three books' worth of essays on modern art and poetry; and the author of six previous collections of poems, Stanford University professor Di Piero is as an imposing a masculine representative of tradition on the West Coast as J.D. McClatchy is on the East. But where McClatchy freshens his old school gin-and-tonics with bare bones carnality, Di Piero consistently injects Kleinzahlerian whimsy into his (here 35 plus) short lyrics, along with pathos-laden descriptions of depression's quotidian: "Medicated to this willowed balance,/ I don't weep now to see dogs run/ or wild fennel bend to winds/ kiting a tern from its brilliant marsh." This solemn attention to nature can mutate into Bocaccio-like satire ("Widowed young, renting country-cheap,/ she could have, he swore, anything she wants./ Dried figs, fiery banana fruit, or half a pig.") or a more man-made gravity, as in "My Message Left Next to the Phone," a near-suicide note describing the spirits (prevalent here) who nearly lured the speaker off a bridge: " 'figures'/ ...scissored into life, gauds flint-struck/ from the half-dark and sunlight and panic.// I felt they'd come for me." Some readers will want to dismiss this work as well-trod emotional and imagistic ground, but Di Piero never quite descends into easiness, and his ear is a great deal sharper than most poets chronicling their art- and writing-centered lives.

Sister Tongue
Sister Tongue
Farnaz Fatemi
Fatemi’s insightful and finely crafted debut takes place in the gap between Farsi and English, with poems drawing their roots from visits to family in Iran and the poet’s Continue reading »

Against Heaven
Against Heaven
Kemi Alabi
Winner of the Academy of American Poets First Book Award, Alabi’s ecstatic debut pulses with the language of Black queer joy. Simultaneously a celebration of the body and a Continue reading »