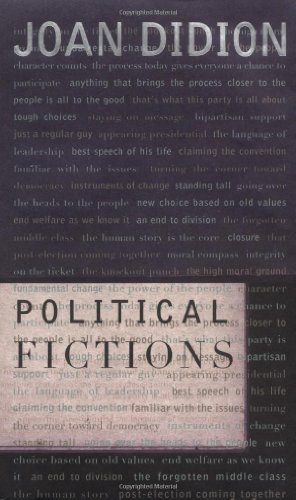 Eight essays by noted novelist and nonfiction writer Didion (, etc.), many originally published either in whole or in part in the , cover politics from 1988 through the 2000 election. At her best, Didion is provocative, persuasive and highly entertaining. She presents a fresh perspective on the oft-analyzed Reagan and Clinton presidencies, especially the Lewinsky scandal. As the title implies, her focus is how the press, think tanks, political strategists and opinion makers conspire to create stories that reflect their biases and serve their own self-interest. Didion's willingness to skewer nearly everyone is one of the pleasures of the book. The bestsellers of journalist Bob Woodward, according to Didion, "are books in which measurable cerebral activity is virtually absent." Cokie Roberts, along with the rest of the Washington press corps, is depicted as a whining moralist aghast at the public's failure to grasp the message in the Clinton-Lewinsky story, which is, as Didion quotes Roberts, "that people who act immorally and lie get punished." Another pleasure is Didion's forthrightness. She tackles directly Vice President Gore's decision to run away from Clinton during the 2000 election. She is unafraid to closely examine the increase in religious rhetoric in American politics. On that topic, many Americans will find disturbing Didion's analysis of the relationship between President Bush's compassionate conservatism, faith-based initiatives and evangelical Christianity. This book will offend many Democrats, particularly of the Democratic Leadership Council persuasion, and many more Republicans, but it is members of the press who fare most poorly. To Didion, they are purveyors of fables of their own making, or worse, fables conceived by political strategists with designs on votes, not news.