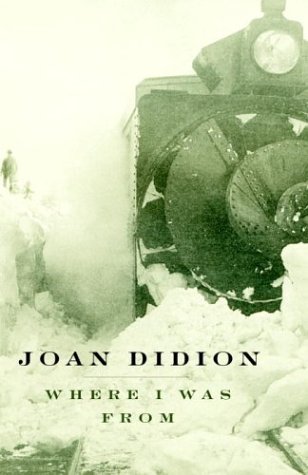 WHERE I WAS FROM

California comes under Didion's captivating, merciless microscope in her controversial look at the greed, acquisitiveness and wasteful extravagance lurking beneath the state's eternal sunshine. In admirably lean, piercing prose, she describes her ancestors, women who could shoot, handle stock and shake snakes from their boots every morning. These pioneers had lived through an arduous crossing far removed from the noble odysseys chronicled by California mythmakers and arrived in wrecked wagons, facing desolation and death. Didion dramatically highlights the gap between California's rosy notion of itself as a land that stood for individual entrepreneurship, and the reality of growing government control and reliance on federal money. As a Sacramento native now living in New York, she conveys the tension of loving an area that's also disappointed her. She utilizes the 1993 Spur Posse scandal, in which teenage boys in Southern California slept with as many girls as possible and then regarded them as notches on their gun, to portray the spiritual vacancy of young Californian men, particularly in light of an overindulgent public attitude that downplayed their moral callousness. Didion cites cozy, pastel paintings by artists like Thomas Kinkade as contributing to the hazily romantic view of a state that treated foreigners early in its history with vicious bigotry, underrated education's importance and committed disturbed citizens to institutions on unacceptably flimsy evidence of their mental state. Throughout, Didion digs deep to find the "point" of California. Many will find her conclusions inflammatory and may rise to California's defense, but the book is a remarkable document precisely because of its power to trigger a national debate that can heighten awareness and improve conditions on the West Coast and throughout the country.