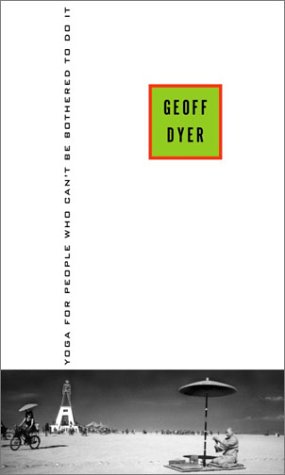 YOGA FOR PEOPLE WHO CAN'T BE BOTHERED TO DO IT

Dyer's ninth book (; ), a collection of 11 personal essays covering his travels around the globe, begins in New Orleans when Dyer is in his late 20s and concludes in the Nevada desert some 20 years later. In between he touches ground in destinations such as Bali and Amsterdam, usually seeking a "peak experience." More often than not, he is disappointed in his quest, but makes engaging stories of many aimless walks, such as wandering stoned through Amsterdam in search of a lost hotel, touring the ruined Roman city of Leptis Magna, or stumbling upon a suicide on South Beach. Even more intriguing than the far-flung locales he describes—such as Cambodia, Libya and Thailand—are the seemingly pedestrian ones he makes exotic. His essay "The Rain Inside," on experiencing a near emotional breakdown at a techno music festival in Detroit, is a masterpiece, equal parts introspection and cutting observation. Though the moments and perceptions he records are fleeting, Dyer deliberately provides touchstones—repeat references to Auden; the durability of his Teva sandals—that mark a path through the book. Fittingly, it's only when he finds himself in the metaphorical nowhere of the TAZ (Temporary Autonomous Zone) at the Burning Man Festival, that this postmodern pilgrim finally finds his place in the world. This original book from a genuine writer—a modern Montaigne—should provide serious readers with a lasting high.