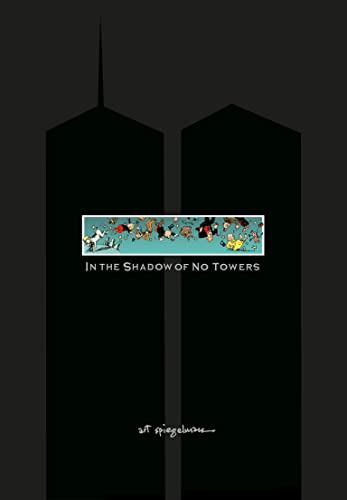 IN THE SHADOW OF NO TOWERS

Pulitzer Prize–winning cartoonist Spiegelman's new work is an inventive and vividly graphic work of nonfiction. It's an artful rant focused on the events of 9/11 and afterward by a world-class pessimist ("after all, disaster is my muse"). The artist, who lives in downtown Manhattan, believes the world really ended on Sept. 11, 2001—it's merely a technicality that some people continue to go about their daily lives. He provides a hair-raising and wry account of his family's frantic efforts to locate one another on September 11 as well as a morbidly funny survey of his trademark sense of existential doom. "I'm not even sure I'll live long enough," says a chain-smoking, post-9/11 cartoon-mouse Spiegelman, "for cigarettes to kill me." The book is a visceral tirade against the Bush administration ("brigands suffering from war fever") and, when least expected, an erudite meditation on the history of the American newspaper comic strip, born during the fierce circulation wars of the 1890s right near the World Trade Center site in lower Manhattan. This beautifully designed, oversized book (each page is heavy board stock) opens vertically to offer large, colorful pages with Spiegelman's contemporary lamentations along with wonderful reproductions of 19th-century broadsheet comic strips like Richard Outcault's and Rudolf Dirk's . Old comics, Spiegelman ( ) writes, saved his sanity. "Unpretentious ephemera from the optimistic dawn of the 20th century... they were just right for an end-of-the world moment." This is a powerful and quirky work of visual storytelling by a master comics artist.