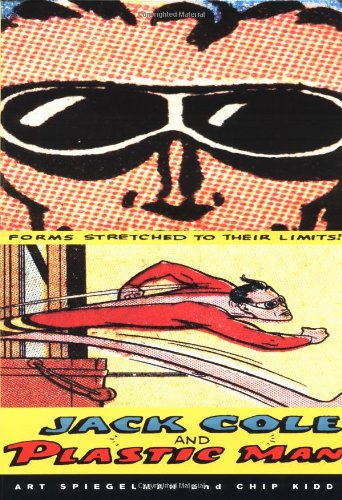 JACK COLE AND PLASTIC MAN: Forms Stretched to Their Limit

The life of Jack Cole, creator of the tongue-in-cheek comic-book crime fighter Plastic Man, is as entertaining as his comic-book stories. A resourceful smalltown boy wonder (in 1932, he cycled 7,00o miles across the U.S. and wrote about it for ), Cole became a professional cartoonist in 1936, in the early days of the comic book industry, after taking a mail-order illustration course. Graphically inventive and prone to wild flights of surreal visual hilarity, Cole anticipated the wit and frenetic comic intensity of magazine in the 1950s and was instrumental in creating the irresistibly lurid crime and horror comic books that provoked the anti-comics hysteria of the same decade. Around the same time, he transformed himself artistically to become the premier gag panel cartoonist at Hugh Hefner's then newly launched . But Plastic Man, a comic strip about a petty criminal transformed by a chemical accident into a stretchable comic superhero, is his real legacy. Cole's work is characterized by relentless sight gags. Plastic Man is usually doing two or three things at once, his elongated arms and legs snaking after weird criminals like Sadly Sadly, a man with a face so forlorn people weep uncontrollably at the sight of him. Noted book designer Kidd has made the reprinted stories look like old, yellowed, newsprint pages. There is a generous selection of full-color reproductions of Cole's work, and Spiegelman's essay briskly maps his life and his career. In 1958, without warning and at the height of his popularity, Cole shot himself, and no one seems to understand why. This is an excellent memorial to an innovative American cartoonist.