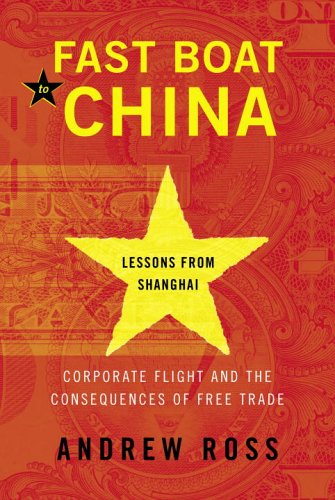 Fast Boat to China: Corporate Flight and the Consequences of Free Trade—Lessons from Shanghai

A cultural critic and frequent commentator on labor issues ( ), NYU professor Ross positions himself in stark opposition to Thomas Friedman's enthusiastic embrace of free trade's extremes, particularly when it comes to American corporations outsourcing jobs to foreign nations. He notes, for example, that there is no evidence to support the assurances of free trade advocates that displaced workers will eventually reap economic benefits from losing their jobs to cheaper markets. China has become one of the key suppliers of cheap labor, leading Ross to wonder what workers there think of their role in the global economic struggle. Wandering around office parks and expatriate social gatherings in Shanghai, a recent magnet for foreign investment, he lays out a compelling ground-level perspective and discovers that workers in China suffer in ways similar to their American counterparts. Management, he writes, follows the same techniques worldwide, playing on employee insecurity to keep wages down. Ross also outlines the history of China's efforts to attract foreign investment, especially in competition with India, and to bring economic development to its remote western provinces. His firsthand reporting is so engaging that even more of it would be welcome, but the economic analysis offers a strong counterpoint to advocates of outsourcing.