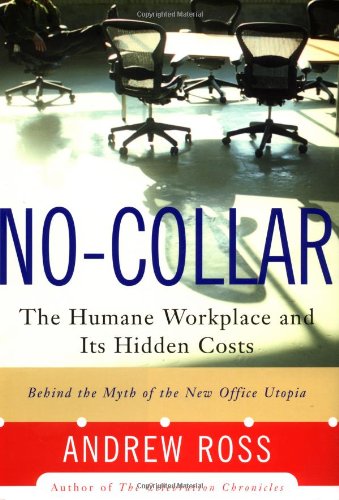 NO COLLAR: The Human Workplace and Its Hidden Costs

The new economy's "no collar movement," in which companies embraced openness, cooperation and self-management among employees, captured the interest of Ross, director of New York University's American studies program. Fed up with reports of increasingly dehumanized workplaces in the wake of Jack Welch–style takeovers and downsizing, he investigated whether the new economy's trend to honor and utilize, rather than suppress, employees' human qualities had the potential to transfer to other industries. Studying two Manhattan-based new media companies, Ross found a refreshing excitement among workers at Razorfish, a design shop–cum–media consulting firm, and 360hiphop.com, a multi-ethnic media site. As Ross conducted in-depth interviews and closely observed operations at these companies, he discovered the young enthusiasts loved their work so much they found themselves working 70-hour workweeks and had almost no outside lives. Ross was also around to witness the wreckage caused when the Internet bubble burst and the companies had to switch their emphasis from the artisan/worker ideal to one focusing on the bottom line (with newly arriving hordes of MBAs calling the shots). The neo-sweatshop conditions may have been justified as being freely chosen before the bubble burst, but Ross's insights into the upheavals and heartbreak that followed the inevitable layoffs have much to say about the real-world limits to building more humane workplaces today. His chilling assessment of the price new economy workers paid for naïve faith in their bosses' promises can also be viewed more broadly as a direct message to all citizens of Free Agent Nation.