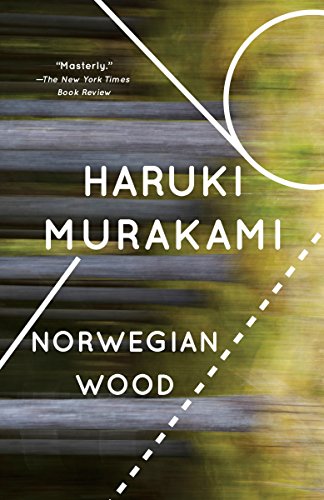 In a complete stylistic departure from his mysterious and surreal novels (The Wind-Up Bird Chronicle; A Wild Sheep Chase) that show the influences of Salinger, Fitzgerald and Tom Robbins, Murakami tells a bittersweet coming-of-age story, reminiscent of J.R. Salamanca's classic 1964 novel, Lilith--the tale of a young man's involvement with a schizophrenic girl. A successful, 37-year-old businessman, Toru Watanabe, hears a version of the Beatles' Norwegian Wood, and the music transports him back 18 years to his college days. His best friend, Kizuki, inexplicably commits suicide, after which Toru becomes first enamored, then involved with Kizuki's girlfriend, Naoko. But Naoko is a very troubled young woman; her brilliant older sister has also committed suicide, and though sweet and desperate for happiness, she often becomes untethered. She eventually enters a convalescent home for disturbed people, and when Toru visits her, he meets her roommate, an older musician named Reiko, who's had a long history of mental instability. The three become fast friends. Toru makes a commitment to Naoko, but back at college he encounters Midori, a vibrant, outgoing young woman. As he falls in love with her, Toru realizes he cannot continue his relationship with Naoko, whose sanity is fast deteriorating. Though the solution to his problem comes too easily, Murakami tells a subtle, charming, profound and very sexy story of young love bound for tragedy. Published in Japan in 1987, this novel proved a wild success there, selling four million copies. (Sept.)
close
Details