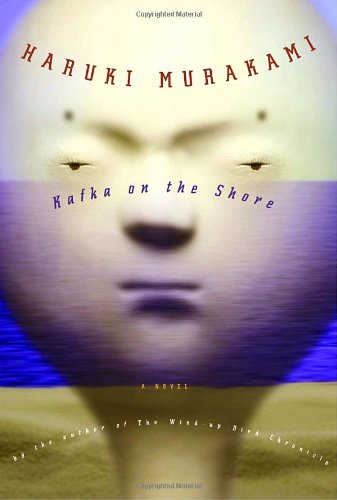 KAFKA ON THE SHORE

Previous books such as and have established Murakami as a true original, a fearless writer possessed of a wildly uninhibited imagination and a legion of fiercely devoted fans. In this latest addition to the author's incomparable oeuvre, 15-year-old Kafka Tamura runs away from home, both to escape his father's oedipal prophecy and to find his long-lost mother and sister. As Kafka flees, so too does Nakata, an elderly simpleton whose quiet life has been upset by a gruesome murder. (A wonderfully endearing character, Nakata has never recovered from the effects of a mysterious World War II incident that left him unable to read or comprehend much, but did give him the power to speak with cats.) What follows is a kind of double odyssey, as Kafka and Nakata are drawn inexorably along their separate but somehow linked paths, groping to understand the roles fate has in store for them. Murakami likes to blur the boundary between the real and the surreal—we are treated to such oddities as fish raining from the sky; a forest-dwelling pair of Imperial Army soldiers who haven't aged since WWII; and a hilarious cameo by fried chicken king Colonel Sanders—but he also writes touchingly about love, loneliness and friendship. Occasionally, the writing drifts too far into metaphysical musings—mind-bending talk of parallel worlds, events occurring outside of time—and things swirl a bit at the end as the author tries, perhaps too hard, to make sense of things. But by this point, his readers, like his characters, will go just about anywhere Murakami wants them to, whether they "get" it or not.