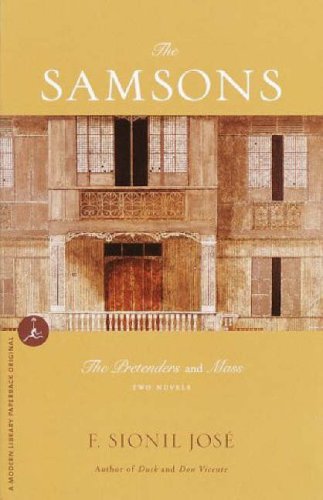 The Samsons: Two Novels in the Rosales Saga, the Pretenders and Mass

Jos is perhaps the Philippines' most admired living novelist, best known for his Rosales series. The two novels published together here are chronologically the final installments in the saga, following Don Vicente (also comprising two novels, Tree and My Brother, My Executioner) and Dusk. Like certain of Bertolt Brecht's plays, the works elaborate and test a central, popular maxim: every man has his price. In The Pretenders, set in the years after WWII, the man in question is Antonio Samson. Tony travels to the U.S., leaving behind his cousin Emy, who, unbeknownst to him, is pregnant with his son. There, he meets Carmen Villa, the daughter of a rich mestizo industrialist, Don Manuel. When Tony returns to the Philippines, engaged to Carmen, Don Manuel proceeds to show Tony how easy it is to buy people. Tony barely protests: he accepts a position with the Villas and goes along with shady business plans. Don Manuel proves his point when he shows Tony a canceled check made out to a magazine journalist whom Tony regards as a man of integrity. Almost simultaneously, Tony realizes that Carmen has lost respect for him and is having an affair. Pushed too far at last, Tony rebels in the only way left to him. The second novel, Mass, is narrated by Tony's bastard son, Jos , or ""Pepe."" Raised by Emy in her native village of Cabugawan, Pepe comes to Manila to attend college, living with his aunt on a lower-middle-class street in Manila, in his father's old room. The next-door neighbor is the mistress of Kuya Nick, a gangster who, like Don Manuel, believes wholeheartedly in human corruptibility. Pepe does some drug dealing for Kuya Nick, but the underworld isn't for him. Instead, through his friend Toto he becomes involved with the Brotherhood, a revolutionary group. After he is shaken by two violent events, Pepe finally commits a truly revolutionary act. Jos 's effects may be achieved in broad strokes, but this dark panoramic vision of the Philippines powerfully drives its message home: a society intent only on calculating a man's price is one that ultimately devalues all men. (Aug.)
close
Details