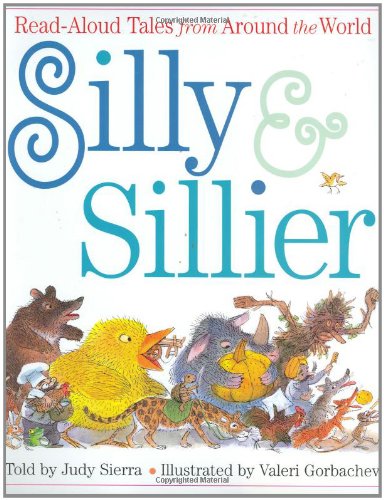 SILLY & SILLIER: Read-Aloud Tales from Around the World

In this spirited collection, reteller Sierra ( and its sequel, , noted below) once again rounds up a bevy of brief, traditional tales. Here, 20 stories from countries as diverse as Bangladesh, Borneo, Mexico and the Czech Republic range from some that will be entirely new to youngsters to riffs on familiar yarns (among them a Russian variation on the tale of a mitten that expands to shelter woodland animals, and a cumulative Irish tale with a refrain akin to that of The Gingerbread Man). In the volume's funniest offering, "Juan Bobo" from Argentina, a simpleton inadvertently wins the hand of a princess. Gorbachev () utilizes her signature renderings of animals endowed with bold personalities to great effect here. Vignettes build the tension in "The Wonderful Pancake" as various pursuers join the fray, while a two-thirds–page spot illustration captures the climactic moment when "Bear Squash-You-All-Flat" bursts the mitten in the Russian story. Balancing nonsense capers and trickster tales, Sierra occasionally integrates words from the language of the country of origin. Though several selections seem a bit slight, well-timed repetition, alliteration, sound effects and copious dialogue from a variety of characters make most of the stories lively choices for reading-aloud. Gorbachev's animated illustrations reflect the international settings and reinforce the playfulness of the tales. Ages 5-8.