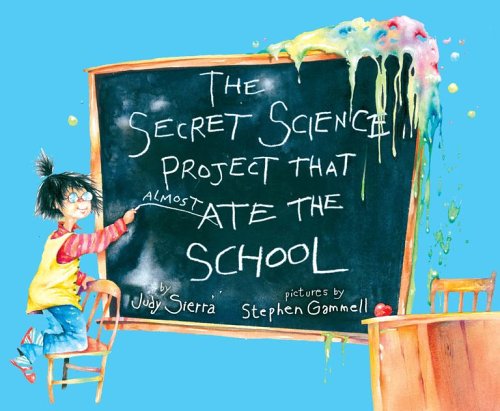 The Secret Science Project That Almost Ate the School

Caldecott medalist Gammell ( ) provides a humorous and hyperbolic visual interpretation of Sierra's ( ) silly, spirited story. The bespectacled, wild-haired young narrator is grouchy because she has yet to find a third-grade science fair project, while her classmates are sitting pretty: "The ants on Mary's ant farm were growing corn and peas,/ And Kevin Fink was on the brink of curing a disease." But eureka! Over the Internet, she purchases a project "guaranteed to win first prize," Professor Swami's Super Slime, billed as "a mutant yeast with just a piece of dragon DNA." When the package arrives, she disregards its warning to keep the slime inside the box until the fair. After she opens the lid and gives the slime "a teeny-tiny poke" (like the star of ), the goo begins to grow (and growl and emit smoke). Gammell's signature spattery artwork is ideally suited to chronicle the slime's expanding girth as it devours the girl's cat, sister, father, teacher and classmates. Finally, she remembers the rest of the instructions: feed the slime sugar "till it swells 1,000 times in mass./ Stand back as it erupts/ Into a harmless cloud of gas." The resulting explosion catapults the slime's ingested victims to tree branches and rooftops. Gammell's illustrations amplify the energy and fun of Sierra's bouncy verse. Ages 6-9.