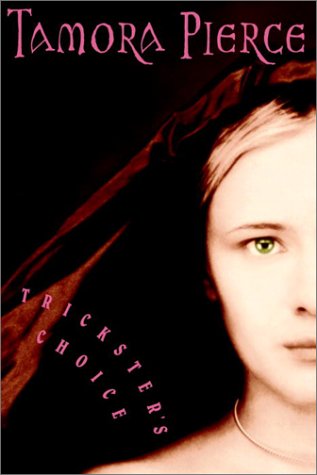 Pierce fans will flock to welcome back the star of her first novel, , this time in a supporting role—the main focus here is her daughter, 16-year-old slacker Aly (short for Alianne). While Alanna fights a bitter war with Scanra in the North, Aly stays at home, trying to figure out what to do with her life, and how to emerge from her mother's shadow. Impulsively, she takes a boat ride, and is snatched by slave traders ignorant of her identity. Aly ends up in the household of a family that has fallen out of favor with the vicious King Oron, who sends them into exile while demanding most of their wealth. Meanwhile, Aly is approached by a "local sea god, among other things," as Kyprioth (the trickster of the title) introduces himself. He sets her a wager: keep the family's children safe for the next three months, and she will be returned home—plus Kyprioth will convince her father to let her become a spy (an idea to which both her parents are vehemently opposed). If she fails, she must act as Kyprioth's servant for one year. Pierce luxuriates in her setting, moving the action along at a pace that might seem sluggish to some, but will be just right to her legion of devotees. As with her other books, this one is densely political, rife with cultural background and sprawling character trees. The climax is worth the wait, and ably sets up a framework for future adventures of this very likable new heroine. Ages 10-13.