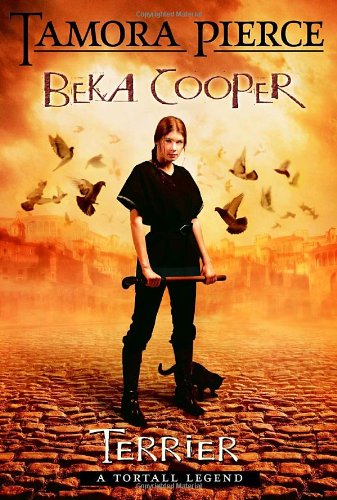 Pierce returns to the Tortall Realms for a new series, a kind of prequel to those of her popular "sheroes" Alanna, Kel and Aly. Her latest heroine is not a lady knight but a "Puppy," a police trainee whose talents lift her from the slums to the manor of Lord Gershom. The noble takes in Beka's impoverished family after the girl, at age eight, demonstrates near-magical abilities in law enforcement. Beka, now 16, begins her story with her first night on the job, told through journal entries. Assigned to two of the best Dogs (veteran officers) in the Jane Street kennel, Beka quickly distinguishes herself, assisted by winged informants (pigeons who carry the ghosts of murdered children and whisper only to Beka) and her aide-de-camp, Pounce, the purple-eyed cat (who will be familiar to Alanna devotees). Beka is drawn to solve two major crimes: one involving the disappearance of people hired to dig beneath the Lower City in search of precious "fire opals," and a scarier thread about the kidnapping and murder of children by a creature known only as the "Shadow Snake." Despite many action-packed scrapes with thieves and rogues, the pace lags a bit in this series opener. Fans of Pierce's previous forays into medieval fantasy, however, will likely savor every page, and Beka herself is a brave battler who shoulders an unwieldy narrative with nearly as much ease as she hobbles a cutpurse. Ages 10-13.