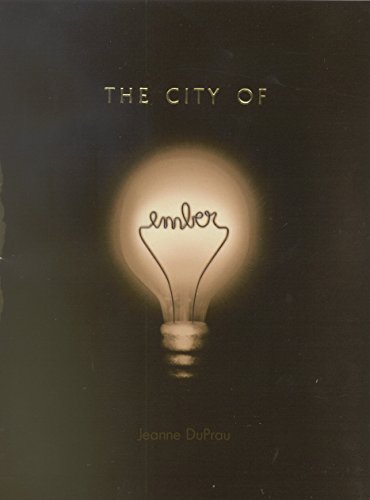 THE CITY OF EMBER

In her electric debut, DuPrau imagines a post-apocalyptic underground world where resources are running out. The city of Ember, "the only light in the dark world," began as a survival experiment created by the "Builders" who wanted their children to "grow up with no knowledge of a world outside, so that they feel no sorrow for what they have lost." An opening prologue describes the Builders' intentions—that Ember's citizens leave the city after 220 years. They tuck "The Instructions" to a way out within a locked box programmed to open at the right time. But the box has gone astray. The story opens on Assignment Day in the year 241, when 12-year-olds Lina Mayfleet and Doon Harrow draw lots for their jobs from the mayor's bag. Lina gets "pipeworks laborer," a job that Doon wants, while Doon draws "messenger," the job that Lina covets, and they trade. Through their perspectives, DuPrau reveals the fascinating details of this subterranean community: as Doon repairs leaks deep down among the Pipeworks, he also learns just how dire the situation is with their malfunctioning generator. Meanwhile, the messages Lina carries point to other sorts of subterfuge. Together, the pair become detectives in search of the truth—part of which may be buried in some strange words that were hidden in Lina's grandmother's closet. Thanks to full-blooded characters every bit as compelling as the plot, Lina and Doon's search parallels the universal adolescent quest for answers. Readers will sit on the edge of their seats as each new truth comes to light. Ages 10-13.