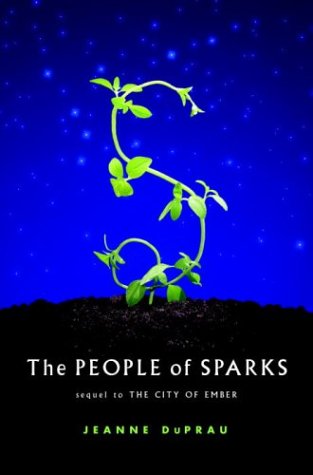 THE PEOPLE OF SPARKS

At the end of , DuPrau's spellbinding debut, Lina Mayfleet and Doon Harrow, having made it safely out of their underground city, toss a message down through a chasm. This ambitious sequel opens as a boy, Torren, spies the survivors of Ember heading toward him, and he's "terrified." Torren's reaction foreshadows those of his fellow citizens. After Lina and Doon and the 417 people of Ember arrive in the town of Sparks ("We have not been aware of any post-Disaster settlements nearby, much less a city," their leaders claim), its citizens share their food and shelter, and they train the people of Ember to work in the fields with the goal of helping them set up a town of their own. But two lone acts of sabotage begin to eat away at the fragile trust between them. DuPrau takes on a sprawling world on the surface of the planet, and once again skillfully and confidently develops the idea of scarcity and how human beings react to a depletion of resources. However, the characterizations here take a back seat (for instance, Lina never visits Clary, an adult friend who played a pivotal role in ; and Sadge Merrall and Mrs. Polster, both with strong personalities in , melt into the masses while virtually invisible citizens such as Tick become major players). Lina stows away in a wagon headed for the city (to see if it could be the one she drew in ); her experience at its ruins result in an epiphany for Lina that, oddly, has little impact on the rest of the novel. DuPrau offers a thought-provoking novel about brinkmanship and the way societies can plant the insidious seeds of war. Her overall message is ultimately uplifting, but it comes at the expense of the development of characters that made so memorable. Ages 8-12.